Pioneer Honours: As a witness to the Shoah against the millions of Jews lost in Poland, Jan Karski said "it is through the reciting of names that existence reveals the abyss we call salvation." Even the act of publishing the names brings those who have gone a dignity too often lost in the great forgetting. The otherwise unheard of, the shelved, the lost, those who went down to early graves and are buried under the detritus of passing time, or else amongst the too often empty books of the story, the blank pages of our ignorance.
So, I am here including those who might otherwise be forgotten, or anonomous, those who came with hope and vision to take selections and maybe failed, maybe succeeded. Those defeated as well as those victorious in the struggle. The farm labourers, the fruit pickers, the landless hirelings, the seasonal workers, the working brunt of raw humanity, all who carried in their hearts and minds and bodies some hope, some desire which was then pitched into battle to live, to prosper, and thrive. Here are the names of the foot soldiers on a forbidding land, a land until then avoided, for it was for them covered by the perpetual shadows of the Old "Wandin Yallock -Dandenong Forest."

The names of them who braved that gruelling campaign need to be heard, to be listed, and their stories told, for they are the names of those who came and went, went down as they struggled in this place with the raw elemental forces of the long default of an entrenched nature tightly holding to the shadowlands its tall sinecure in the precedence of trees, who battled to continue in an adverse climate and who pitted themselves to a closely prized and vegetatively-guarded geography, who sought to exchange their labour, their wits, and their love, in the hope of a return, in the hope of betterment. It is that hope, that betterment, which lays the foundations of everything we are granted by our latter arrival, and too easily take for granted.

"..it is through the reciting of names that existence reveals the abyss we call salvation." Jan Karski 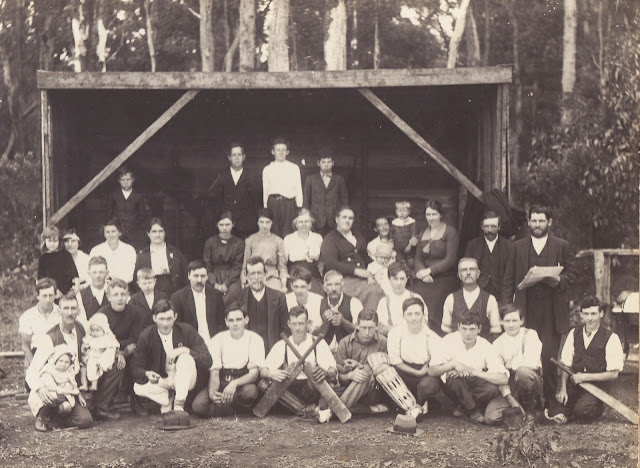 Dating the Photograph. My date of 1918 is based on the evidence of the Lowe family children. Jim and Bella Mackie LOWE are recorded as having five children, four of whom are in the Photograph: - 1. James John Joseph Lindsay LOWE b. 1912 Carlton; 2. Robert James LOWE b.1914 Wandin South; 3. John Mackie LOWE b. 1916 Wandin South; 4. Emma Erson LOWE b. 1917 Wandin South; & after this time, 5.Arthur Stanley LOWE b. 1919 Wandin South. As the youngest child is the fourth, Emma Lowe, here being held by her father Jim Lowe, and by appearance less that nine months old, I must conclude that this is either late 1917 or early 1918, or at the very latest, late 1918, certainly well before their non-appearing fifth child was born in 1919. 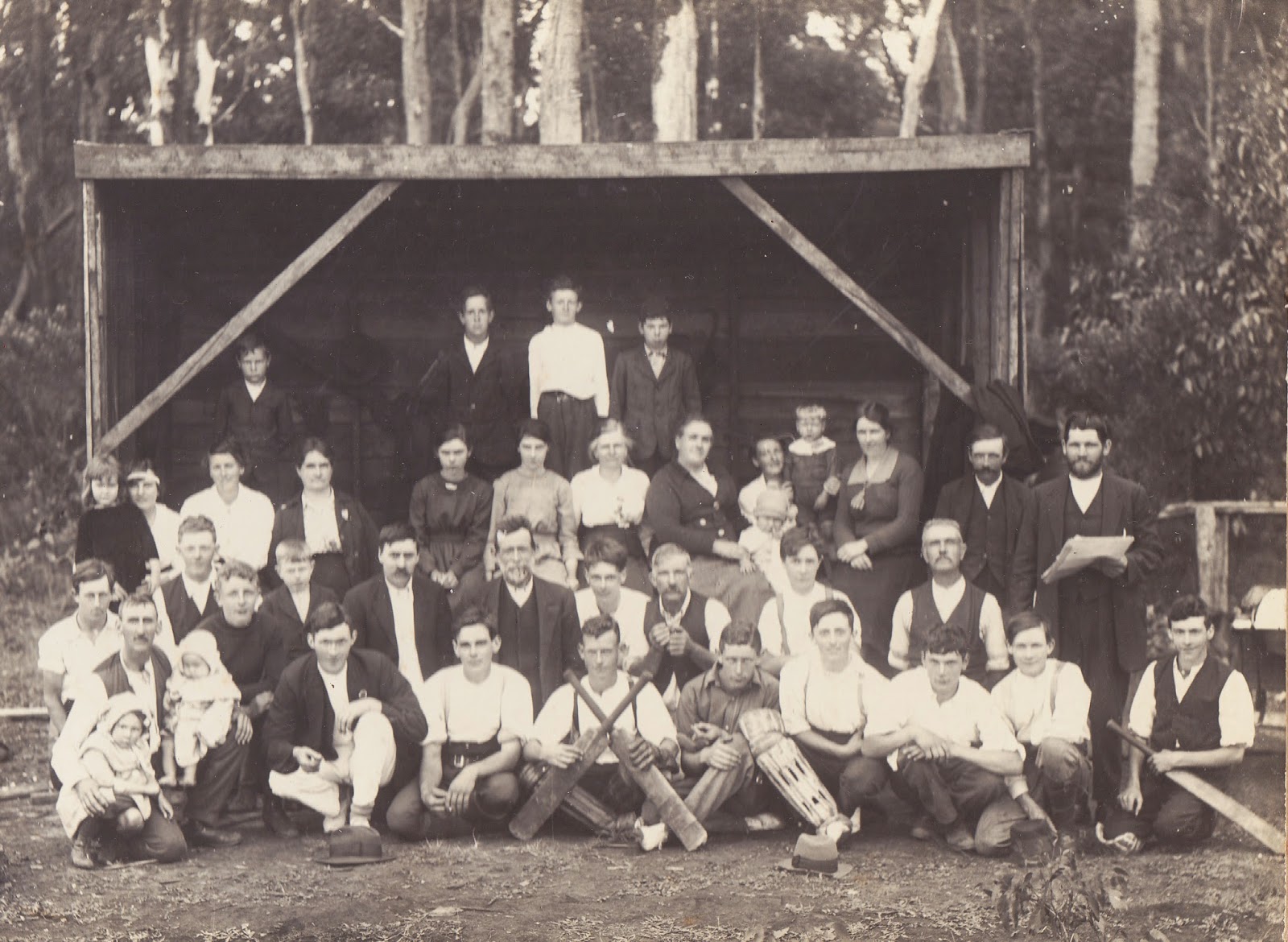 SO, WHO COULD THEY BE - Here's some hints/ possibilities:

The CHAPMAN brothers? There were three of about the right age: Frank Chapman b.1896; Ern Chapman b.1898 & Ralph Chapman b.1903 - but they were my great uncles, and I sort-of know what they looked like, and they seem not to be there. Neither are the next two younger brothers John Henry Chapman & Charlie Eric Chapman b.1909 there. I have evidence which has led me to believe that in the earlier generations the Chapman family was focused on a six day long regime of farm, work, and church, and they did not go in for time spent on frivolities like cricket. And back then their Sunday was the Sabbath; not a time for work or for sport.

The JOHNS brothers of Wiseman Road? There were two of about the right age: Reg Johns b.1901; and Lawrence Johns b.1906. - but they were also uncles and cousins of mine and I do not see them in the picture. Even more well known than the Chapmans was the strong work ethic and devout Christian conviction of the John/Johns family, and they were then known for their rectitude and disdain of popular entertainments, and sport seemed be of no interest to them.

Okay, here's a list of others in the district of that age. - I have emboldened the strongest likelihoods.


ALPHABETICAL - Not in Historical Order 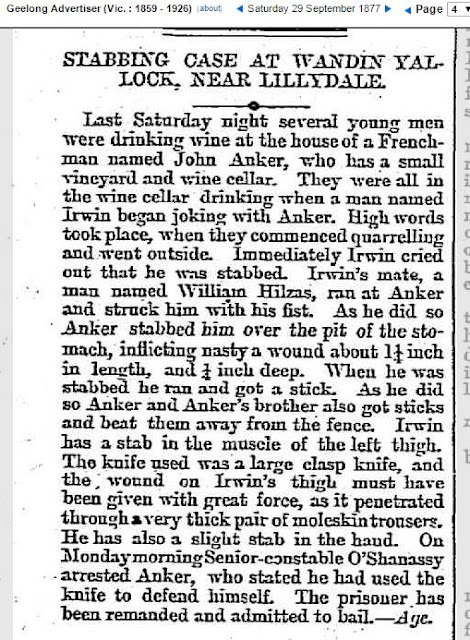 
“Those who lose sight of the goal often concentrate on mere motion and try to derive pleasure from it. They delight in turning the pages of a book, but never finish the story; they pick up brushes, but never finish a picture; they travel the seas, but know no ports. Their zest is not in the achievement of a destiny but rather in gyration and action for the mere sake of movement.” Archbishop Fulton Sheen (Way to Happiness)
ARENTS, Luis Joseph Victor 'Louis' -b.24 August 1859 Nieuport, West Flanders Province, Belgium - son of Joseph Francois Albert ARENTS & Isidorine Joseine PEPITHAN - EMIGRATED to arrive at Port Melbourne on the 3rd June 1883 per the ship "CHIMBORAZO" from Antwerp? Belgium. Occupation: ORCHARDIST. -Residence: Canterbury Road, Tunstall, Nunawading. Selected Land in the Dandenong Forest (Olinda Forest) Village Farm Scheme, being Allotment 9 of Section N in the Parish of Monbulk. Mail address: via Clegg, Wandin South. Location of Land: now in Silvan Reservoir Reserve, off McCarthy Road. Bachelor: never married. No children. Arents abandoned the allotment in the summer harvest season of 1893-1894 and was forced to forfeit it in favour of William Evans. NATURALIZED: just ahead of total war, 18th April 1913 at Canterbury Road, Tunstall, Nunawading, Victoria - @ age 53, Occupation; Orchardist, after 29 years in Australia. Continued on the Orchard at Tunstall, Canterbury Road, Nunawading. Died 1938 in Blackburn, Nunawading District, Vic. Cremated: Springvale 26/11/1938.

5. AXFORD - Kept a market garden first by the Yarra at Abbotsford and later at Mooroolbark.

Wayne D Knoll
I am a 4th-to-6th generation Australian of Silesian (Prusso-Polish), Welsh, Schwabian-Württemberg German, yeoman English, Scots, & Cornish stock; all free settlers who emigrated between 1848-1893 as colonial pioneers. I am the 2nd of 7 brothers and a sister raised on the income off 23 acres. I therefore belong to an Australian Peasantry which historians claim doesn't exist. I began to have outbreaks of poetry in 1975 when training for a Diploma of Mission Theology in Melbourne. I've since done a BA in Literature and Professional Writing and Post-graduate Honours in Australian History. My poem chapbook 'Compost of Dreams' was published in 1994. I have built a house of trees and mud-bricks, worked forests, lived as a new-pioneer, fathered-n-raised two sons and a daughter, and am now a proud grandfather. I have worked as truck fresh-food farmer, a freelance foliage-provider, been a member of a travelling Christian Arts troupe, worked as duty officer and conflict resolutionist with homeless alcoholic men, been editor/publisher of a Journal of Literature for Christian Pilgrimage, a frontier researcher, done poetry in performance seminars in schools and public events.